There is a gorgeous exhibition of artifacts of migrants to Australia at the Museum of Australian Democracy currently. The exhibition brings together stories, pictures, art works, photographs and other materials to tell fascinating stories of courage, bravery, loyalty and love woven through the migrant experience.

The stories are illuminated via belts, suitcases, glass artworks and lots of other treasures. One display has a roll of very large pictures of several generations in a refugee families. This exhibition has a focus on Jewish refugees whose stories have the added power of the intensity of their experience post World War Two. 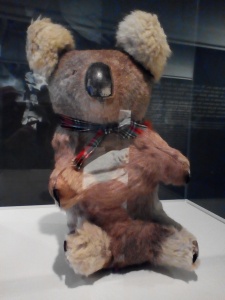 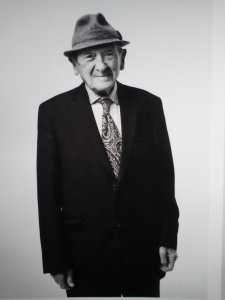 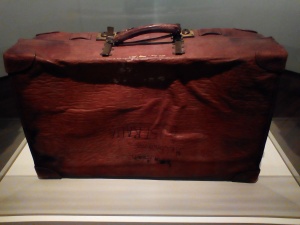 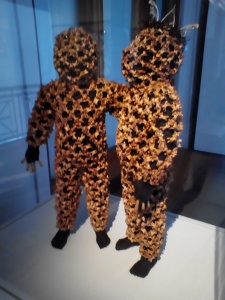 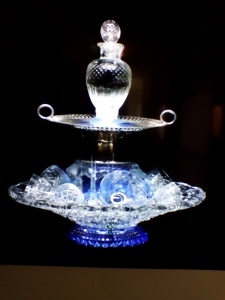 Sean Davey, Lucile Carson, Euan Graham, Mona Khizam, Penny Ryan, Barak Zelig,  Nicci Haynes and Caren Florance were all involved in a great exhibition at the Tuggerenong Arts Centre that I enjoyed but forgot to write up. Ian warden’s article on it does a much better job of covering it than I ever would so I have just included the link to it and some pics below. 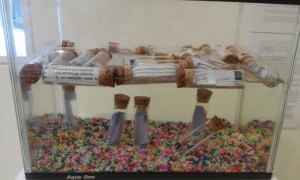 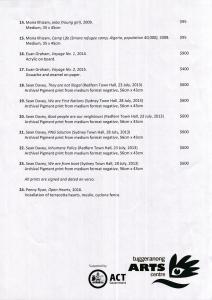 Liverpool high schools combine each year to exhibit high quality art from their students in a show at  Casula Powerhouse. i have seen previous shows but I am convinced that this one is the best I have seen. The skills and the exciting creativity on show is marvelous.

Many of the schools have student populations that draw from many migrant communities and this fact enriches the subject matter and styles on show. There are religious and cultural elements all through the exhibition and a remarkable level of insight and sensitivity expressed.

Have a look at the examples I have put below. I was rapt. 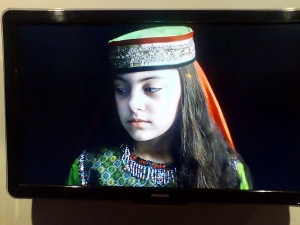 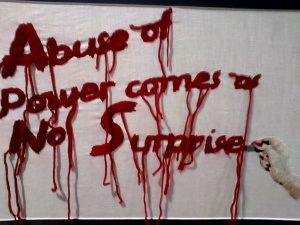 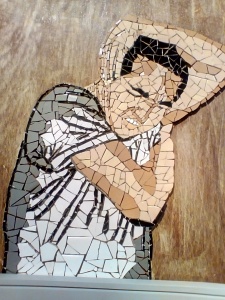 This exhibition is confronting and deeply emotional as it seeks to bring attention to the experience of boat borne refugees. The artist was present and explained to us that the genesis of the exhibition was through a friendship shared in shift work with a man who had gone through the experience.

I was touched on an emotional level by pretty much every image in the exhibition. The images have several themes woven through them, water, small boats, huddled people, fear and wire fencing. The images grasp in a vivid way vulnerability of humans on the water. The brutality of wire fencing holding humans from what they are trying to achieve is portrayed with a confronting clarity. The weaving of several themes into single images is very helpful for understanding of the issues.

Below is the gallery sheet and some representative pics 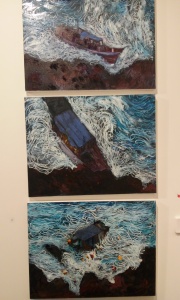 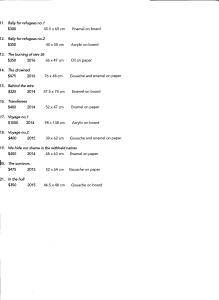 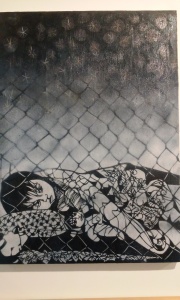 29 August – 8 November 2015
“Citizens band documents the individual performances of four migrant musicians, concluding with a polyphonic piece created by playing all the soundtracks together. Each player produces a distinct sound through techniques that are inflected with their cultural origin. All poignantly evoke their remembrance of the homeland and their displacement from the urban Western context in which they perform.” The blurb tells you that but the videos show something much more wonderful.
There is a wonderful juxtaposition in each of these. The lady waist deep in a Paris swimming pool brings a vitality to performing drum beats in a distinctly different context. The others maintain the same striking disconnect but the one that amazed me was the blind man playing a keyboard on his shoulder standing in a Paris Metro carriage. The music was haunting and the reaction of the people as their lives intersected with his music were riveting.
The sequence, the beauty the size makes the reproduction here a bit pointless but I have done some snaps. The web page is linked here\
http://www.artgallery.wa.gov.au/exhibitions/Screen-Space-Angelica-Mesiti.asp 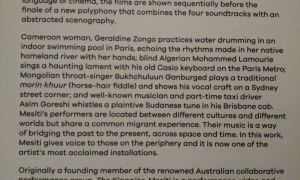 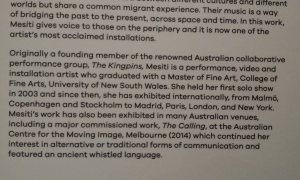 Serving Australia: The Jewish Involvement in Australian Military History @ Sydney Jewish Museum
While I am mainly over war myth creation and reinvention because of the ever present result of $200 million spending on it for WW1 this exhibition was a delight. The aim of it is to tell the story of the contribution of Jewish Australians to the various overseas wars we have been involved in. It also tells of their complex experience because of distrust and prejudice.
I always love reading stories about the untold bits of war. Governments love to blind their people whenever they run wars. Reading these counter narratives post war builds your confidence in knowing you are being snowed when wars are being run.
This exhibition covers from Boer to Afghanistan and peace keeping. It includes employment corps that did infrastructure work because the members were either conscientious objectors or were from untrusted groups or nations. It also tells stories of major figures such as Monash. It is like everything in this museum text rich and clearly told. I enjoyed the read.
http://sydneyjewishmuseum.com.au/explore/permanent-exhibitions/ 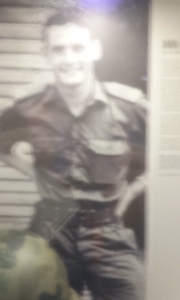 I love political art. Peter Kongmalvong’s art is visually arresting and politically insightful. As a photographer he has clarity and purposeful approaches to his work. To have a strongly Asian face embedded in a poster for a seemingly racist style political party is illustrative of his work. It would be an interesting experience to have Peter explain this work.
The pics below give a sense of what he does in his art. 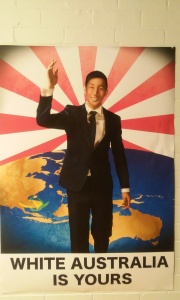 Artists engage with migration issues often. The exhibition at Canberra Contemporary Arts Space by Anja Loughead re looks at Bonegilla Migrant reception centre from the 1950s. She weaves wonderful old blankets old migration connected books and photographs artistically interwoven with prints and cut and paste to present a set of engaging images to revive thinking about immigration and our history.
There is a sense of fun combined with an awareness of the toughness of the experience of the migrants. Some of the images are remarkable and the combinations speak volumes – printing news reports on old blankets brought you face to face with the past richly.
Some pics below give a sense of Ms Loughead’s work 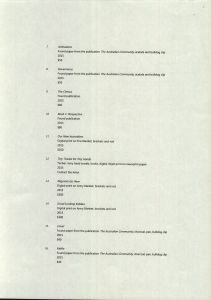 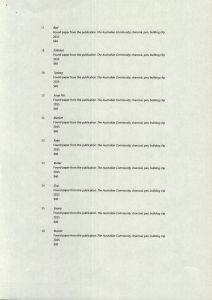 As white male history teacher I make it a point to seek out histories that are not about me and my kind. Too much of what I have read and have seen was written by and about us white men and we tend to leave out and or misrepresent anyone who is not white and male.

The Celestial Chinese exhibition at the Sydney Museum was a rich experience for me and it ticks the boxes I love in a museum. It is rich in visual representation of the experience of the Chinese community in Australia over the last two centuries. It contains lots of material written from their perspective and about their lives. It abounds in ordinariness and familiarity – reminding me of how embedded and contributing the Chinese community have been to my life and my history. It portrays in a clear way how deeply racist has been the treatment by the white people who took this land from the indigenous occupiers of the Chinese who were just another invading race.

The best part for me was the pointing out of the day to day contributions they made to ordinary people’s lives. I had not known their involvement in the furniture business but it reminded me of an experience I had 15 years ago. I had designed a large drop sided table to solve a problem we had at home entertaining big groups. I found a place in Sydney to build two of them from drawings I gave them on the back side of one of their flyers and returned to Canberra. When they were delivered they had some big flaws in the result. I was very disappointed. I contacted the company borrowed a box trailer and went to their factory. An office worker who spoke English and Mandarin heard my problem, ushered me into the workshop and sitting on the floor under the tables she explained my problems to two Mandarin speaking carpenters. After an intense conversation she emerged with a solution that got the tables in line with my vision. Worried I would have to return to Sydney I was amazed they agreed to do both tables then and there and 45 minutes later we loaded them on my trailer and we have entertained hundreds of people on them for a decade and a half.

The exhibition was a delight. Attached are some pics and a brochure. 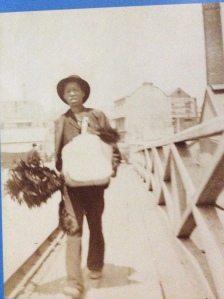 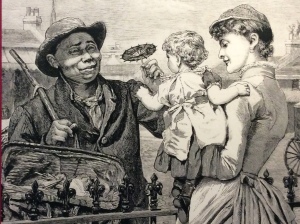 Photographers often give us a clarity in delightful ways, Louise Whelan has done a rich job in portraying the changing nature of Australian society. With less than thirty photographs she has given a window into the rich tapestry of the new ethnic diversity of Australia. She has done it in photographs of people embedded in normal family activities in distinctly Australian circumstances. There is a married couple from Africa on a verandah bordered with antique wrought iron. There is another African family wielding a Victa mower on their suburban back yard. There are Russian Jews, there are diverse religious activities and there are a delightful set of ordinary people doing standard things. This exhibition is a delight, setting up a contrast between the often vicious media discussion, the often harsh government response to new arrivals and the ordinary and rich contributions migrants make to our society.
See some pics below if you can’t get into the State Library 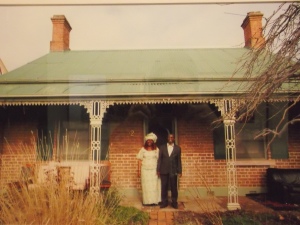 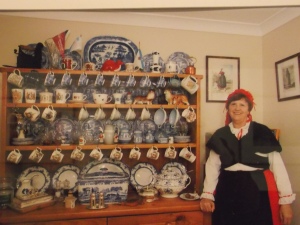 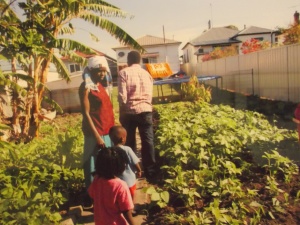